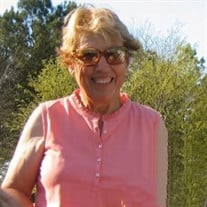 Graveside services for Mrs. Allis Lorraine McBride will be private. Mrs. Allis Lorraine Pipkin McBride died at her home at Belmont Village in Atlanta, Georgia on July 18, 2020. Mrs. McBride was 87 years old. Mrs. McBride is survived by her three children Michele (Michael Barile), Kerri (Iku Nakada) and Barry (Laura Scanlan,) and seven grandchildren, Michael Patrick and Lorra Barile, Adam and Nathan Nakada, and Alyssa, Ian and Emma McBride. Lorraine, as she was known to her family and friends, was born in Wilton, Arkansas on June 8, 1933, to Sallie Mae Pipkin and Hal Zan Cooksey, both deceased. She attended Whiteface High School in Whiteface Texas, and Texas Tech University in Lubbock Texas. She met her beloved husband, Douglas E. McBride, while Mr. McBride was stationed at Reese Airforce Base in Lubbock, and they were married soon after. Her daughter Michele was born in Lubbock during this period, after which the family relocated to Angola, Indiana, where the young couple welcomed their second child, Kerri. A new job for Douglas later took them to Greenville, Ohio where son Barry was born. Earning a Masters Degree at Kent State University, Lorraine began a new career in teaching when the children were older, teaching middle school to students in Chagrin Falls OH, Aiken SC, and Duluth GA before retiring with Douglas to Cuscowilla at Lake Oconee, Eatonton, Ga. Her retirement was filled with family, as she and Douglas often hosted the extended family for holidays at Cuscowilla. Following Douglas’ death in 2018, Lorraine moved to Atlanta to be closer to family. A talented musician, Lorraine played both flute and piano and sang, even recording a record or two while studying music at Texas Tech. She was a voracious reader, a dedicated gardener, and the devoted mistress of her many dogs. She was an active member of the Eatonton First United Methodist Church, and spoke fondly of fellowship with her ANEW Sunday School Class. Lorraine will be remembered for her beautiful smile, kind heart and generous manner. The family plans to gather to celebrate her life at some time in the future. In lieu of flowers, please consider a donation to the Prostate Cancer Foundation, the American Cancer Society or to Eatonton First United Methodist Church.

The family of Allis Lorraine McBride created this Life Tributes page to make it easy to share your memories.