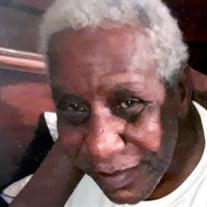 Bobby Harris, age 75, passed away Friday July 9, 2021. Funeral services will be held 2:00 PM Saturday July 17, 2021 in the chapel of Williams Funeral Home of Eatonton. The family will receive friends from 1:00 PM until the service time. Burial will follow at Eatonton Memorial Park. Bobby Harris was born on December 22, 1944 to Cora Lee Harris in Eatonton,GA. Bobby was known by many names such as, “Uncle O”, “Wine”, “Pops”, “Ugly” just to name a few. He was a loving husband, father, uncle and friend. He had a heart of gold and a tremendous sense of humor that made everyone he encountered instantly attach to him. Bobby worked in asphalt paving for McIntosh, APAC and C W Matthews for more than 30 years before retiring. He was a hard worker that was dedicated to making sure that his family was well taken care of. Bobby loved life, family, and good soul food. He could be found in the kitchen any day of the week cooking neck bones, pig feet, oxtails, and his favorite food turnip greens. He LOVED turnip greens! Bobby departed this life on July 9th at home with his family surrounding him. He battled cancer for several years and had been in the hospital for the past month but was always in good spirits. When he knew his fight was ending, he told his son, “I don’t want to die in the hospital. I want to go home.” On the day of his death, he made sure that his family was with him, at his home. He called his son that was not home and told him to come help him back in bed, just so he could make sure he was there. Before taking his last breath, he opened his eye to let his wife know that he heard everything she said and acknowledge that he loved her. He was preceded in death by his mother Cora Lee, his sisters Lucy and Annie Lou, and his brothers, “Cornbread” and “Shug.” He leaves to cherish his memory his wife Barbara Harris, his sons Antonio and D’Eric Harris, and daughter Angel Harris, grandchildren, great grandchildren and a host of nieces, nephews and friends.

Bobby Harris, age 75, passed away Friday July 9, 2021. Funeral services will be held 2:00 PM Saturday July 17, 2021 in the chapel of Williams Funeral Home of Eatonton. The family will receive friends from 1:00 PM until the service time. Burial... View Obituary & Service Information

The family of Bobby Harris created this Life Tributes page to make it easy to share your memories.