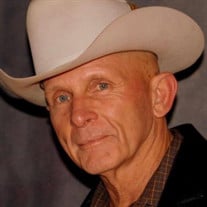 Charles Roy Embry, third generation farmer, moved to Heaven on what would have been his parent’s 75th Wedding Anniversary on Wednesday, April 13, 2022. He was born in Eatonton, Georgia on March 2, 1948 to Florence Carnes Embry and Cecil Jackson Embry. Roy grew up in Eatonton, learning the art of farming from his father at a very early age. Roy graduated from Putnam County High School in 1966 and shortly after was drafted into the United States Army where he served two years including a tour in Vietnam. Roy married Betty Whiddon and they had two children, Donna Embry Van Haute (Paul) and Terrell (Terry) Jackson Embry. Upon returning home from the Army, Roy worked as a partner with his father, growing, expanding and cultivating the land on New Phoenix to become one of the most successful dairy operations in Putnam County. In 1985 Roy purchased the farm from his mother, Florence, after the passing of his father, Cecil. Embry Farm Service began its transition to the next level. During this time, Roy married Ruth Winslette and upon Ruth’s sister’s death, they raised Ruth’s two nieces, Holly and Hannah Miller. As the years passed and Donna and Terry advanced to Grammar School, it would be no surprise to ride by the farm, and see a big truck riding in the field with what appeared to be no driver, which was when Terry began working with his father. Through the years, under Roy’s entrepreneurship skills, together, he and Terry transitioned what was once a single dairy operation into the future, becoming a successful multi-farm operation serving Putnam County and the surrounding areas as the number one provider of beef cattle, hay and fertilizer. The father-son duo then also diversified the operation to add a trucking business called Embry Transport. Although Roy was notably known as a farmer, he was best known to have a special gift of service and story-telling. Roy spared no expense of his time to make sure that he looked after his family, friends and community before himself. His smile, laughter, kind heart and benevolence reached far and wide. Roy was a lover of the land, a tiller of the soil, a people person with a passionate personality, and a heart for Jesus first, which spilled over into his love of family and friends. Eatonton’s light is dimmed only for a short time as Roy left his mark on all who knew him. He made a difference in this world. He lived like he was dying every day. He was intentional. No regrets. Always present with his presence. His life doesn’t end here…it’s just beginning. Roy is survived by his wife Ruth Embry of 34 years; his daughter, Donna Embry Van Haute (Paul); son, Terrell (Terry) Jackson Embry; Sisters, Shirley Embry Stephens and Carol Embry Hawkins (Johnny); Six Grandchildren, Emily Embry, Jackson Embry, Kate Embry, Garric Embry, Cooper Archebelle, Jessie Archebelle; his nieces, Holly and Hannah Miller; and several others together with a host of close family and friends. A Memorial Service will be held at the Embry Farms Cabin, 619 Greensboro Road, Eatonton, GA, on Saturday, April 16, 2022 at 1:00 PM. In lieu of flowers, GA Plant Food Educational Society or to Roy Embry Scholarship Fund at Gatewood Schools.

Charles Roy Embry, third generation farmer, moved to Heaven on what would have been his parent&#8217;s 75th Wedding Anniversary on Wednesday, April 13, 2022. He was born in Eatonton, Georgia on March 2, 1948 to Florence Carnes Embry and Cecil... View Obituary & Service Information

The family of Charles Roy Embry created this Life Tributes page to make it easy to share your memories.