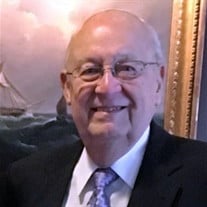 On Monday, August 19, 2019, Dan Howard Benshoof, a loving husband, father, grandfather and great-grandfather, passed away at the age of 84. Dan was born on December 21, 1934 in Cedar Rapids, Iowa to Howard and Florence Benshoof. He graduated from Drake University in Des Moines, Iowa in 1956 and served in the United States Marine Corp from 1957 to 1962. Dan worked for Manufacturers Life Insurance Company. On October 27, 1967 Dan married the love of his life, Helen Benshoof. They were married for 52 wonderful years. Dan was a true patriot, loved watching Fox News and had the privilege of serving as a Delegate in the 1984 Republican National Convention. He enjoyed spending his summers in York Beach, Maine eating lobster and walking the cliffs. He was also a Life Master bridge player. Dan was known for his loving smile, his beautiful singing voice and his infectious sense of humor. Dan was preceded in death by his parents and his brother Max. Dan is survived by his wife, Helen, his two children Cynthia (Jeff) Smith and Brucie (Don) Hooper, fur-baby Sweetie Pie, his five grandchildren, Justin (Shannon), Casey, Ashley, Cameron and Jennifer, five great-grandchildren, his brother Ted and sister Barbara, and numerous nieces and nephews. A celebration of life will be held on Friday, August 23, 2019 at First Baptist Church Eatonton at 11:00 A.M. Visitation will be an hour prior to the service. In lieu of flowers, donations may be made to the First Baptist Church of Eatonton Endowment, where Dan served as a faithful Deacon. 115 N. Madison Avenue Eatonton, GA, 31024 Williams Funeral Home of Eatonton has charge of services

On Monday, August 19, 2019, Dan Howard Benshoof, a loving husband, father, grandfather and great-grandfather, passed away at the age of 84. Dan was born on December 21, 1934 in Cedar Rapids, Iowa to Howard and Florence Benshoof. He graduated... View Obituary & Service Information

The family of Dan Howard Benshoof created this Life Tributes page to make it easy to share your memories.