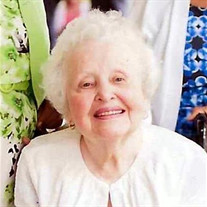 On January 9, 2020, Georgia Davis Corley left as sweetly as she lived with us at Brightmoore Nursing Home in Griffin, Ga. Georgia was born in Coosa County, Georgia, on February 23, 1923. Georgia graduated from Monticello High School. Her family moved to Macon during World War II, where she worked at the Naval Ordinance Station. Soon after the war, she was introduced to Jeff Corley. They married and soon moved to Eatonton, Georgia where they would build their lives and family. Georgia and Jeff were textbook examples of “The Greatest Generation,” selflessly working hard and saving to provide a better life for their children and grandchildren. Georgia was very involved at First Baptist Church and Gatewood Schools, while working in various doctors’ offices. She is known and loved by many as “Miss Georgia.” If you asked her what her greatest accomplishment was, without hesitation she would say, her children and grandchildren. Georgia was a wonderful mother, and quite possibly the best “Mimi” ever, always spoiling her grandchildren. She was known for her hospitality, inability to sit down, keeping an immaculate household, and always having wonderful food on hand for friends and family. And, of course, an endless supply of sweet tea. Georgia’s husband of 65 years, Daniel Jefferson “Jeff” Corley, her parents and all five of her siblings preceded her in death. Georgia is survived by her son Andy Corley and his wife Juanita of Newport Beach, CA, her daughter Lisa Hopkins and son-in law Phil of Griffin; grandchildren and their spouses Erica Jackson (Alex), Davis Corley (Lana), Corley Hopkins Raileanu (Jeff), Jeff Hopkins (Chris Gebhardt), and Drew Corley; four great grandchildren, nieces and nephews, and many more who would count Miss Georgia as family. For the last 10 years of Georgia’s life, she was in declining health. During this time many special friends and caregivers graced her life, in particular, Louise Nash, who was a friend and nurse to Georgia and Jeff for over 20 years, and the staffs of Brightmoore Nursing Home and Hospice. A celebration of Georgia’s life will be held at First Baptist Church, Eatonton on January 25, 2020 at 11 Am with visitation following in the church social hall. The family asks that in lieu of flowers donations be given to First Baptist Church of Eatonton, Georgia, Loving Eyes Foundation or Young Life or Young Lives of Griffin, Georgia

On January 9, 2020, Georgia Davis Corley left as sweetly as she lived with us at Brightmoore Nursing Home in Griffin, Ga. Georgia was born in Coosa County, Georgia, on February 23, 1923. Georgia graduated from Monticello High School. Her... View Obituary & Service Information

The family of Georgia Davis Corley created this Life Tributes page to make it easy to share your memories.