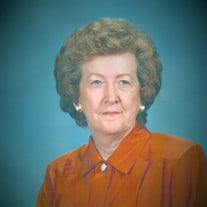 Janette Lawrence Moore, 83, of Eatonton, Georgia, left this earth for her heavenly home on March 7, 2017, after a seven-year battle with cancer. Funeral services will be held Thursday, March 9th 2017 at 2:00 Pm in the First Baptist Church of Eatonton. The family will receive friends from 1:00 PM until the service time. Janette was born in Eatonton, Georgia, on March 18, 1933. One of seven children, Janette was the youngest child of John Martin and Fannie Mae (Resseau) Lawrence. A fifth generation Putnam Countian, her family played an integral part in the geographic, social, and cultural landscape in this county. She was baptized into First Baptist Church of Eatonton in 1948. She graduated from Eatonton High School in 1950 and attended Georgia State College for Women in Milledgeville. Janette worked at Southern Bell in Atlanta where she met and married H.D. “Bill” Moore. They moved back to Eatonton in 1956 and were married for fifty years. Together they owned and managed Moore L.P. Gas for over 30 years in Eatonton. She was a member of First Baptist Church of Eatonton and served on numerous committees and organizations. She was a member of the “Golden Girls.” “Granet” as she is known by many, was a name of affection bestowed on her by her grandchildren. One of her friends recently called her a “regal warrior,” and her sense of humor and keen wit will be remembered by all who knew and loved her. She was a historian and a student of genealogy. Janette was the last surviving member of her family, which included her brothers and sisters, Lucy (Elmer) Seymour, Marion (Ben) Williams, Ruby (Charlie) Hawkins, John Milton Lawrence, David Louie Lawrence, and Charles Phillips Lawrence. Her love of family initiated an intense interest in genealogy that has spanned over 25 years. She met family members from nearly every state during her research, and several have remained in contact. She did genealogy research for others who were not related to her but for whom she wanted to help. “Granet” is preceded in death by her husband Bill (2002) and her daughter Debbie (2016). She is survived by her daughter Vicki Rogers (Danny) of Eatonton; her grandchildren Cristi Sheppard (Mike) of Eatonton, Leslie Peebles (David) of Eatonton, Matthew Rogers of Nashville, Tennessee, and Carri Thomas (Jacob) of Greensboro. She was also treasured by her great grandchildren, and they lovingly called her “Nanette”--Hunter Sheppard, Lawson Peebles, Billy Peebles, Braxton Thomas, Wyatt Thomas, and Elli Blake Thomas. She is also survived by numerous nieces and nephews. In lieu of flowers, the family asks that donations be made to First Baptist Church of Eatonton.

Janette Lawrence Moore, 83, of Eatonton, Georgia, left this earth for her heavenly home on March 7, 2017, after a seven-year battle with cancer. Funeral services will be held Thursday, March 9th 2017 at 2:00 Pm in the First Baptist Church of... View Obituary & Service Information

The family of Janette Lawrence Moore created this Life Tributes page to make it easy to share your memories.