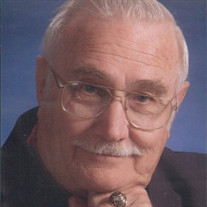 Funeral services for Jerry R. Smith will be held Sunday, June 28, 2015 at 2:00 O'clock in the Eatonton Presbyterian Church. The family will receive friends immediately following the services. Burial will take place at the Georgia War Veterans Cemetery in Milledgeville, Ga. Mr. Smith passed away on June 22, 2015, he was born in Atlanta, Ga. November 8, 1932, the son of Horace L. and Eula Lee Smith. He grew up in Macon graduating from Lanier High School, where he played football and ran track. He entered the US Navy during the Korean War and served as a Hospital Corpsman with the US Marines at Paris Island. He returned to Macon and graduated from Mercer University. While there he met and married Sylvia Underwood, his "help-meet" (KJV) in the Lord. He entered Walter F. George Law School and after completing his first year, received a call to the ministry. He entered Southern Baptist Seminary and graduated in 1962. He was pastor of a church in Kentucky and after several years became pastor of a church in Georgia. After several years he answered a plea for pastors who would serve as military chaplains. During the Vietnam War he became a US Navy Chaplain serving one tour of duty on Destroyers in the Gulf of Tonkin and two tours of duty with the Navy Seabees in Vietnam. He served as a chaplain in hospitals, an alcohol rehab center, chapels on board ships, in combat in Vietnam, and with CREDO in Italy. During his active duty he was sent back to seminary in New Orleans to get another Masters Degree. After 30 years of service he retired and became the pastor of a church in Virginia. Returning to Georgia, he and his beloved wife made Milledgeville their home. He was a clinical member of the American Association of Marriage and Family Councelors, the Military Officers Association, worked with Habitat for Humanity in Virginia and Georgia. He also helped establish the "Serenity Home" for homeless alcoholics and drug addicted men in Milledgeville. He and Sylvia were active in supporting children in Africa and India for over 40 years through the Christian Children's Fund. Throughout his ministry he was an avid student and teacher of the Bible. He wrote "A Pastor's Notes for Teaching", which covers 23 of the 27 books of the New Testiment in over 1200 pages. He was Preceded in death by a son, Jeffery, who flew for the US Air Force. He was Preceded in death by his beloved wife Sylvia who died on April 15, 2013 after 57 years of blessed marriage. He is survived by his wife Ann Brackett Penney; a sister, Marian (Conrad) Nelson of Atlanta; four children, J.R. Smith of Virginia Beach, J. Rodney Smith of Charleston, SC, Julie Lee Brookshire of Houston, Texas and J. Randy Smith of Milledgeville. He is also survived by six grandchildren, Will Brookshire, Jay Smith, Lesley Smith, Jenna Murray, Lauren Smith, and Shannon Smith as well as one great grandchild Annabelle Murray Jerry Smith died in the faith by which he lived. He believed in Jesus Christ as his Lord and Savior and is at peace with all who knew him.

Funeral services for Jerry R. Smith will be held Sunday, June 28, 2015 at 2:00 O'clock in the Eatonton Presbyterian Church. The family will receive friends immediately following the services. Burial will take place at the Georgia War Veterans... View Obituary & Service Information

The family of Jerry Smith created this Life Tributes page to make it easy to share your memories.