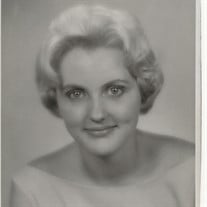 Marianne Tanner, of Eatonton, passed away on January 9, 2021, at Lynn Haven Health and Rehabilitation Center in Gray, Georgia. The daughter of the late Charles Walter Tanner and Mary Yarbrough Tanner, Marianne was born in Charlotte, North Carolina. She grew up in Savannah and moved with her parents to Eatonton in 1958, where she entered the 8th grade. She was an outstanding member of the Class of 1963 of Putnam County High School. She participated in many clubs and activities, including the Putnam County Blue Devils Cheerleading Squad in her tenth through twelfth grades, class reporter in the 11th and 12th grades, Science Club, member of the Homecoming Court and served on the Briarpatch Annual staff. She was elected Most Talented in the Superlatives of the Class of 1963. Marianne graduated from the University of Georgia in 1967, where she was a member of Delta Zeta Sorority (Zeta Pi Chapter) with a Bachelor of Fine Arts degree with emphasis on Interior Design. After graduation she worked for several large architectural firms in New York City, Old Greenwich, Connecticut and Baltimore, Maryland. While in Baltimore she restored a beautiful 19th century town house as her home which was featured in the Sunday Sun Magazine of the Baltimore Sun newspaper. It was just one of many outstanding design projects to which she contributed. She was known throughout her life for her creativity and her imaginative designs within both the historic and contemporary genres. While in Baltimore, her lifelong love of horses led her to join the prestigious Baltimore Hunt and Riding Club. Marianne retired and operated a small horse farm in Menlo, Georgia and later moved back to Eatonton. In 1993 she began a 20 year long career with the Board of Commissioners of Putnam County. She served first as Deputy Registrar and moved to Administrative Assistant and Building Inspector for the Planning Department later that year. By 2002 she became the Chief Deputy Registrar and then moved to the Sheriff’s Office in 2005 and served there in various capacities through 2013, when she retired on August 2, 2013 with a proclamation from the Board of Commissioners for her faithful service. Marianne served on the board of directors of the Eatonton-Putnam County Historical Society, Inc. from 1994 until 2017 and restored a Victorian Cottage on Magnolia Street as her personal residence in 1994. It was one of two newly restored homes featured on the 1995 Christmas Tour of Homes. She was also a founding member of the rebirth of All Angels Episcopal Church in 1999 and served faithfully as Secretary of the Vestry for many years. She was very involved in the restoration of the 1899 original Queen Anne Victorian-style All Angels Church building, sharing many interior design concepts throughout its restoration and also in the addition of the new Parish Hall. She was one of the petitioning members who were received in November of 2001 at the Annual Council of the Episcopal Diocese of Atlanta at St. Philip’s Cathedral in Atlanta when All Angels Episcopal Church was admitted as a full Parish of the diocese. She also remained active in animal rescue operations with the Putnam County Animal Shelter and the Oconee Regional Humane Society. A Celebration of Life Memorial Service will be held at a later date at All Angels Episcopal Church. Interment will be at Bonaventure Cemetery on the Tanner Family Lot in Savannah, GA. Survivors include her aunt, Mrs. Hazel Yarbrough and cousin Ms. Joy Yarbrough of Eatonton; cousin J. Fred Tanner and family of Buford, GA; and cousin Gary Lackey and family of Savannah, GA. Memorial donations may be made to All Angels Episcopal Church, P.O. Box 4695, Eatonton, GA 31024 or Oconee Regional Humane Society, 1020 Park Avenue, Suite 101, Greensboro, GA 30642.

The family of Marianne Tanner created this Life Tributes page to make it easy to share your memories.