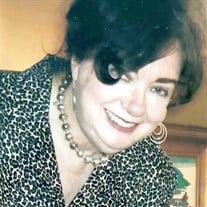 Mrs. Patricia Sue McMullen Walker, age 77, passed away December 22, 2018 in a Macon hospital. Funeral Services will be held Wednesday, December 26, 2018 at 11:00 AM in the Chapel of Williams Funeral Home of Eatonton. The family will receive friends promptly after the service. Burial will be private. Mrs. Walker was born on September 11, 1941 in Milledgeville, Ga. To the late Parnel N. McMullen and the late Berta Moore McMullen. Patricia grew up in Milledgeville, Ga and graduated from Baldwin High School in 1959 with honors. She married her high school sweet heart Perry shortly after and attended college at Georgia College in Milledgeville and South Georgia College in Douglas, Ga. Patricia and Perry lived in Charleston, SC, Sandersville GA, and finally Eatonton, GA where they raised their two sons Perry Jr and Ashley. Through her personality and graciousness, she made many lifelong friends along the way. She tragically lost her first-born son, Perry Jr. to an illness at the age of 46. She dealt with that loss through her strength, faith and character. The above attributes prepared her to persevere through a relentless bout with Lymphoma until complications finally were too much for her weakened body to withstand. If you were blessed to be a friend of Patricia, you were a lifelong friend. Patricia had a love for animals and especially her beloved dogs Stitch and Pearl. Patricia’s family is so indebted to the doctors and caregivers at the University of Alabama, Emory University, and finally Navicent Medical Center for the exceptional and compassionate care to make her last days comfortable. They are thankful for the selfless sacrifice of her sister Jeanette who stayed with her during her whole time while getting therapy at Emory and being her primary caregiver. Patricia is survived by her husband Perry Walker of Eatonton, her son Ash (Dana) Walker of Macon, grand children Calan Walker of Macon and Ava Walker of Macon, sister Jeannette (Horace, Sr.) McMullen of Milledgeville, brother Jerry McMullen of Milledgeville, 2 sister-in-laws Sandra McMullen of Milledgeville and Debbie McMullen of Milledgeville, brother-in-law Yancey Walker of Milledgeville, as well as many nieces, nephews, great nieces and great nephews. In lieu of flowers, please make contributions to the Hope Lodge at Emory University and the American Cancer Society. This lodge provided a home away from home and provided support for families dealing with cancer by providing free lodging and transportation for many who came hundreds of miles for treatment. Patricia will be sorely missed by everyone who loved her including her grieving family.

Mrs. Patricia Sue McMullen Walker, age 77, passed away December 22, 2018 in a Macon hospital. Funeral Services will be held Wednesday, December 26, 2018 at 11:00 AM in the Chapel of Williams Funeral Home of Eatonton. The family will receive... View Obituary & Service Information

The family of Patricia Sue McMullen Walker created this Life Tributes page to make it easy to share your memories.