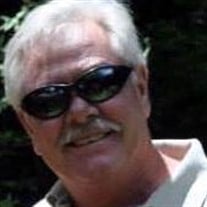 Mr. Robert "Bob” Charles Wood, age 66, passed away peacefully at home in Eatonton, GA after a brief fight with cancer. He was surrounded by his family, neighbors, friends, and his beloved bloodhound Ellie Mae. A celebration of life will be planned in New Hampshire and Georgia at a later date. Originally from Hingham, MA, he joined the Air Force and after 4 years of service, he moved to New Hampshire, where he raised his family with his longtime love, Doris. He worked hard to build a business, Bob Wood Construction. He took great pride in his work, employees, customers, and family. He retired from construction in 2016 when he moved to Eatonton, GA, where he always found something to fix, property to clear, or treasures to create. He lived his life "Pedal to the Metal" with a get it done attitude. He rallied until the very end in true Bob Wood fashion. He was preceded in death by his parents Charles and Beverly Lawrence Wood as well as a brother Bruce Wood. Bob is survived by his wife Doris Wood of Georgia, daughters Charlene Crowell and husband Andrew of New Hampshire, and Alison Morel and husband Aaron of Georgia, son John Robert Wood and wife Meredith of Georgia, brothers Barry Wood and wife Anne Marie of Massachusetts, Randall Wood and wife Diane of New Hampshire, and Timothy Wood and wife Bette of Massachusetts, sister-in-law Cathy Wood of Massachusetts, grandchildren Amanda Ray, Courtney Crowell, William Crowell, Emily Crowell, Abigail Morel, Amelia Morel, Aaron “AJ" Morel, and Lucas Robert Wood. His family is forever grateful for those that surrounded them, including the wonderful people from Compassionate Care Hospice. Because of their lasting impression, the family is asking in lieu of flowers, donations be made to Compassionate Care, Payable to Amedysis, 2340 Prince Ave. Athens, GA 30606

Mr. Robert "Bob&#8221; Charles Wood, age 66, passed away peacefully at home in Eatonton, GA after a brief fight with cancer. He was surrounded by his family, neighbors, friends, and his beloved bloodhound Ellie Mae. A celebration of life will... View Obituary & Service Information

The family of Robert Charles Wood created this Life Tributes page to make it easy to share your memories.