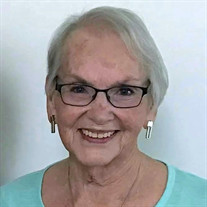 Shelba Jean Pickard Key passed away September 9, 2020, after a brief illness. She was born February 27, 1937, in Adairsville, the firstborn child of Wilburn Horace and Hazel Greenway Pickard. While still an infant, her family moved to her hometown of Louisville. After graduation from Louisville Academy, she attended the Georgia Baptist School of Nursing in Atlanta, where she became a registered nurse. Early in her career she worked for doctors in private practice as well as the Macon Hospital (now The Medical Center, Navicent Health). After moving to Eatonton in 1967, she stayed home to be a full-time mother and homemaker, before returning to work in 1976 as a public health nurse with the Putnam County Health Department. She loved her career and continued working into her mid-70’s. She was an active member of Friendship Sunday School class at First Baptist Church for over 50 years. She put her faith into action over the years as she taught Sunbeams, helped with Vacation Bible School, and served on missions, bereavement, and other committees. Her dedication to her church and her service to the community as a public health nurse were an outward expression of her deep inner faith. Her greatest pride and joy were her family. She is survived by her two daughters, Pam (Clayton) Lancaster and Laura (Frank) Thompson. Her grandchildren are Jake (Pete) Thompson, Katie (Edwin) Hanks, Ben (Melanie) Thompson, Maggie (Eric) Carpenter, Trey (Kaitlyn) Lancaster, Gregory Lancaster, and Martin (Lauren) Floris. Her great-grandchildren are Amelia, Caroline, Addie, Raiford, Rentz, and Charlie. She is also survived by her siblings, Janice (Don) Williams, Betty (Will) Culpepper, and Steve Pickard. A private family service to honor her life will be held at a later time. In lieu of flowers, memorial contributions may be made to any of the following: First Baptist Church Endowment Fund, P.O. Box 3400, Eatonton, GA 31024; or Extra Special People, Inc. ( extraspecialpeople.com ); or International Mission Board ( imb.org )

Shelba Jean Pickard Key passed away September 9, 2020, after a brief illness. She was born February 27, 1937, in Adairsville, the firstborn child of Wilburn Horace and Hazel Greenway Pickard. While still an infant, her family moved to her hometown... View Obituary & Service Information

The family of Shelba Jean Pickard Key created this Life Tributes page to make it easy to share your memories.