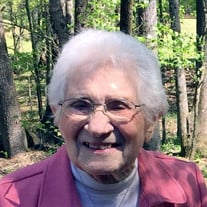 Victoria Mallard Ricks, 99, passed away at home Sunday, June 14, 2015. Funeral services will be held at the First Baptist Church, Eatonton, at 10:30 a.m. on Thursday, June 18, with the Reverend William Kitchen and Dr. Keithen Tucker officiating. Graveside services will be held at the Westview Cemetery, Soperton, at 3:30 p.m. The family will receive friends at Williams Funeral Home, Eatonton, Wednesday Evening from 5 until 8. She was a kind, loving, happy, hard working, energetic and spiritual woman whose family and friends were paramount in her daily life. One of 11 children, she was born October 24, 1915 in Statesboro, to Ben T. and Eliza Smith Mallard. She graduated from Statesboro High School in 1932 and received a teaching certificate from South Georgia Teacher’s College (now Georgia Southern University) in 1934. Her first teaching position was Sardis Elementary School from 1935-40. She moved to Soperton in 1941 where she met and married Charles Lewis Ricks. Mrs. Ricks worked for many years at the Bank of Soperton, returning to Georgia Southern where she earned her B.S. in Education in 1969. She taught at the Treutlen Elementary School until retiring in 1977. She was a member of the Eastern Star, the Retired Teacher’s Association and the First Baptist Church in Soperton where she taught Sunday School. In 1982 she and her husband moved to Eatonton and made it their home. During the intervening years she was a member of the First Baptist Church Eatonton, the Cabiri of Al Sihah Shrine Temple in Macon, the Alathean Sunday School Class, Lake Oconee Community Bible Study and Phoenix Homemakers. She enjoyed playing Bingo with her friends on Tuesday afternoons. Victoria Ricks was preceded in death by her beloved husband Charles L. Ricks and her son-in-law Roy P. Taylor. She is survived by six children: Glenda McDugald (Thomas T.) of Tucker, Gloria Ricks Taylor of Athens, Sandra Holliday (Cook) of Monroe, Teddy Ricks (Donna) of Eatonton, Vicki Lynne Zimmerman (Richard) of Eatonton and Ann Citro (Tony) of Duluth. A son Mallard Ricks died soon after childbirth. She has ten grandchildren and 19 great grandchildren. She is survived by one brother Charles L. Mallard (Willette) of Statesboro. Memorial contributions may be made to the First Baptist Church, P.O. Box 3400, Eatonton, GA. 31024 or Al Sihah Shrine Temple, Transportation Fund, P. O. Box 3147, 222 Mecca Drive, Macon, GA 31205.

The family of Victoria Mallard Ricks created this Life Tributes page to make it easy to share your memories.