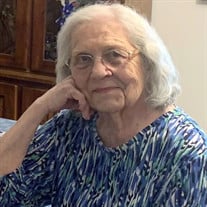 Virginia (Dean) Blount, age 93, passed away Thursday, May 12, 2022, in Eatonton, Georgia. “Ginger”, as she was affectionately called, was born in Sarasota, Florida on December 11, 1928, to the late Elsie Cecil Dean and Floyd Everett Dean. Ginger is preceded in death by her husband, Wylie Dillard Blount, Jr. of Eatonton, Georgia, sister, Patricia Anderson of Alpharetta, Georgia, and brother, Donald Dean of Ladson, South Carolina. Ginger graduated from Sarasota High School in Sarasota, Florida and attended William and Mary before beginning her career in the airlines industry. Ginger was a flight attendant for Southern Airways, in Memphis, Tennessee, where she met her husband of 61 years, Wylie, originally from Gough, Georgia. They moved to Hapeville, Georgia, where Wylie had grown up, in 1958. Ginger went on to work for Delta Air Lines for 29 years and retired in 1992. Ginger and Wylie moved from their home in Hapeville, Georgia and made Eatonton/Lake Sinclair their new permanent home in 1998. Ginger loved Siamese cats, sewing, watching old movies, music, attending Georgia Bulldog football games and enjoying the lake life and the many friends they made in their neighborhood. Mrs. Blount is survived by her daughter Lori Sundal and husband Rob Sundal of Dunwoody, Georgia, granddaughter, Laura Sundal, nephew Eric Anderson and other family members.

The family of Virginia Dean Blount created this Life Tributes page to make it easy to share your memories.