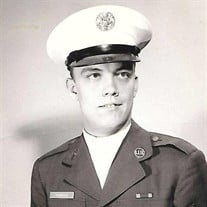 Woodrow “Wayne” Thompson, age 77, of Gray, passed away Sunday, February 3, 2019. He was born June 8, 1941 in Eatonton, Georgia, to the late Walter Woodrow Thompson and the late Marjorie Helen Russell Thompson. In addition to his parents, he was also preceded in death by his wife, Darlene Mae Haddad Thompson. Mr. Thompson retired from a military career that lasted 39 years and 5 days of active service to the U.S. Air Force and the Air National Guard. He served in the 4133rd Provisional Bomb Wing, and participated in the Arc-Light Bomb Raid in Vietnam. He survived the Great Alaskan Earthquake of 1963. Mr. Thompson spent approximately 50 years in Massachusetts. He had been back in Georgia for the last seven years, to be close to his grandchildren. He was an extraordinary Grandfather, a Mason, and he loved Genealogy. Survivors include: His Sons, James “Jim” Thompson (& Gina) of Gray and William “Bill” Thompson (& Jen) of Camp Douglas, Wisconsin ; His Daughter, Lisa Thompson of Gray ; Five Grandchildren, Caitlin Thompson, Pvt. Coleman Thompson, Caroline Thompson, Benjamin Thompson, & Clara Thompson ; Two Sisters, Helen Kitchens (& Ronnie) of Eatonton and Linda Cowan (& Steve) of Covington ; his Brother, Terrell Thompson (& Shirley) of Perry ; and Numerous other relatives. Funeral Services for Wayne Thompson will be conducted Monday, February 11, 2019 at 1:00 PM at the Williams Funeral Home of Eatonton. Interment will be held Tuesday, February 12, 2019 at 2:00 PM in the Georgia National Cemetery in Canton, GA, with full military honors. The family will receive friends at the Williams Funeral Home of Eatonton on Sunday, February 10, 2019 from 4:00 PM until 6:00 PM. Condolences may be expressed online at: www.williamsfuneral.net Williams Funeral Home of Milledgeville and Eatonton is in charge of arrangements.

Woodrow &#8220;Wayne&#8221; Thompson, age 77, of Gray, passed away Sunday, February 3, 2019. He was born June 8, 1941 in Eatonton, Georgia, to the late Walter Woodrow Thompson and the late Marjorie Helen Russell Thompson. In addition to his... View Obituary & Service Information

The family of Woodrow Wayne Thompson created this Life Tributes page to make it easy to share your memories.